This is the second time this year that the Syrian refugees in Jordan and Lebanon have been hit hard by the severe winter weather.  During the first two weeks of January 2015 extreme weather conditions for the region hit hard with high winds, and freezing cold in the evenings. Heavy snowfall has collapsed tents, forcing the refugees to find other shelter, which is hard to do.  After the snow started to melt there was flooding of the tents and the portable buildings that were put right on the ground.  The refugees lost a lot of what meager belongings they had that were ruined by the water, including mattresses, clothing, food, etc. Some of that was replaced from NGOs and volunteers, but certainly not all.

February came along and the cold weather returned again, with snow and ice and high wind conditions.  Tens of thousands of refugees are living in the camps and other in makeshift shelters across the region and they are not able to keep their families warm.  Some have kerosene heaters, but with the high winds and the snow collapsing the tents, it is very dangerous.  We have had numerous reports of children being burnt by kerosene heaters in the tents. 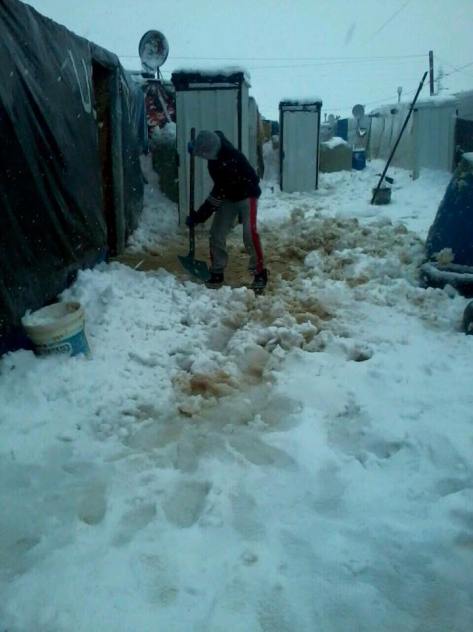 We sent two containers from Seattle in late December, one of which arrived and was distributed; the other one has not arrived yet due to the delays caused by the labor dispute at the west coast ports. We have received word that the second container should be arriving by the 27th of February, but a third container we just recently filled has been sitting on the dock for the last two weeks due to the dispute.  I am not sure when the labor dispute will end and the container will be loaded on a ship and on its way to Jordan, but once it does it will take about a month to get to Jordan if there are no more delays.  Rita is leaving on March 13th for another medical mission and could really use your help with funding to buy the needed goods there for the families affected by the recent severe winter weather.

A lot of you have sent us donations of warm clothing, but they are stuck at the port and we need to get items to keep these families warm.  Fuel for heating will be purchased for the families to keep them warm in the evenings.  Solar powered lanterns have been ordered so the kids can read and do some studying at night instead of sitting in the dark (the sun goes down at 5:30pm). We also want to buy them some books and school supplies. All of these items are stuck in transit. We also want to buy them food at $31 for a month’s worth of food for a family of 5.

If everyone can just reach deep into their pockets again, you can help us help the refugees who are in dire need right now.  Rita will take the cash with her and purchase these items in Jordan and we will post pictures of what we have purchased and how we were able to distribute it.

Please go to our web site www.salaamculturalmuseum.org and click on the donate button now.

More Donations Going to the Refugees in Jordan

Photos from mission volunteer in Greece